The Septuagint (abbreviated LXX) is a general term for the Greek versions of the Old Testament, incorporating translations from the Hebrew Bible and other works classified as deuterocanonical or apocryphal. Most of the translations were made in Egypt, and perhaps more specifically the political and cultural centre of Alexandria, although some may have been made in Palestine. Strictly speaking, the Septuagint (denoting “seventy” translators) refers only to the translation of the Pentateuch, which, according to the Letter of Aristeas, was translated by seventy-two translators (six from each of the 12 tribes). In time it has come to be used as a term for the Greek Old Testament.

The translated books of the Septuagint were produced between the 3rd century BCE and the 1st century CE and were translated in varying styles. Revisions and new translations were also made over time, so that there is considerable diversity in the manuscript history of the Greek Bible. 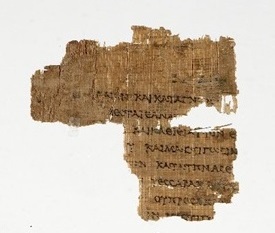 The date of the translation of the Pentateuch can be established with some confidence in the 3rd century BCE. Egypt came under Greek rule after the death of Alexander the Great in 323 BCE, and was ruled by Alexander’s successors (known as the Ptolemies), who promoted Greek language and culture. Aristeas places the translation of the Pentateuch in the time of Ptolemy II, in the early 3rd century, although this may be a later attribution owing to that king’s famed cultural sponsorship. Nevertheless, the language reflects that of the early post-classical period (the 3rd century BCE) and the first manuscript evidence begins to appear in the 2nd century BCE, confirming a likely 3rd-century date.

All the traditions place the translation in Alexandria, and certainly the presence of Egyptian vocabulary and Egyptian elements in the translation would support this. The reasons for translating are less clear. The growing importance of Greek in Egypt under the Ptolemies certainly stimulated the need for a translation in Greek, and diverse explanations are given, including the loss of knowledge of Hebrew, a liturgical need for the scriptures in Greek, and a school-room or legal purpose. After the Pentateuch had been translated, it is uncertain when the other books were translated. Some had been completed by the time of the translator of Sirach (after 132 BCE) who in the preface to his translation alludes to the existence of various translations of the Hebrew Bible. The differing styles and translation technique of the books offer clues to their dates and purposes in translating.

The translators did not have a systematic method of translation, as the term “translation technique” might imply, but it is possible to describe their working practice. For the Pentateuch, the first translations, we see a method that is also attested in other ancient translations, largely following the word order of the Hebrew source text, choosing consistent word equivalents for the same Hebrew words, and translating Hebrew idioms “literally,” Consistency of equivalents (such as διαθήκη “covenant“) and Aramaic spelling of words that must come from the spoken language (such as πάσχα “Passover“) suggest there is oral experience behind the translation that led to agreed translation equivalents.

Some of the other books followed the same translation practices of the Pentateuch translators, while others perfected it in one of two ways. Certain books (most notably Proverbs and Job) show a greater freedom in rendering of the word order to conform to Greek idiom and choose a wider range of vocabulary, some of it from literary Greek. Other books (such as Psalms) aim at greater consistency of translation equivalents, and in their adherence to the Hebrew idioms and to word order. Many of these can be grouped by their strict adherence to the Hebrew (such as Lamentations, Song of Songs) and some appear to be further developments of this strict method (Ecclesiastes). This group of translations may be a later tradition in translation, reflecting consideration of the translation method and a concern for precise representation of the Hebrew text behind the Greek. These therefore may derive from the 1st centuries BCE or CE, and in some cases could have been produced in Palestine where the concern for the Hebrew was uppermost.

The Greek language of the translations is typical of post-classical Greek. This means that it reflects developments in the language that can be traced from the 3rd century BCE onwards. This period of language is known as Koine (“the common dialect”), which refers to the language becoming a universal trans-regional dialect of Greek in place of the older multiple dialects of Greek. The language also is close to the everyday language that has been preserved in the papyri found in Egypt, as first demonstrated by A. Deissmann. It does contain some literary features, too, so that the translations can be said to contain educated Greek of everyday communication.

As all translations, there are elements of interference from the source text, which have been called Hebraisms. For example, the idiom in Hebrew of using the verb “to add” before another verb to indicate repeated action leads to the odd use in Greek of the verb προστίθημι “to add” in an attempt to match the Hebrew idiom. Such cases are few and should not obscure the existence of the natural Greek in much of the Septuagint. On the stylistic level there are features that are more frequent than in standard Greek owing to the close following of the Hebrew, and deviation from standard Greek is confined to semantic and syntactic extension. 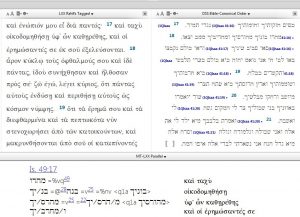 The first translations of Septuagint books are known in scholarly parlance as the “Old Greek” of those books. This term differentiates it from the revisions and new versions that arise in an attempt to improve the translations. Our earliest attested revision is that of the Minor Prophets scroll found in Nahal Hever in the Judean Desert and dating from the 1st century BCE. This translation of the Minor Prophets is based upon the Old Greek, but, in similar fashion to the group of translations following strict adherence to the Hebrew, it revises the Old Greek towards greater consistency in Hebrew. Similar revisions can be seen in the manuscript traditions of other books, and in some cases (such as for Judges, Esther, and Daniel) there are clearly more than one version in circulation.

Revisions continued throughout antiquity, and were attributed to significant figures in the early church (such as Lucian or Theodotion) or were preserved without attribution (as in the case of the A-text of Esther or the Barberini Codex). Aquila and Symmachus are two prominent Jewish revisers of the 2nd century CE, who translate in different ways but both adhere to the Hebrew and show an interest in its exegesis.

Scholarly interest in the Septuagint lies in a number of areas. It is an important source for post-classical Greek and new search tools are allowing for advanced linguistic research, It is also a witness to the Hebrew text behind the translation, as confirmed by the Hebrew text evidenced in the Dead Sea Scrolls, and to the beliefs of Jews in this period. It also serves as an important witness to the text that inspired both early Jewish writers and Christian writers.

The International Organization for Septuagint and Cognate Studies

This website uses cookies to improve your experience while you navigate through the website. Out of these cookies, the cookies that are categorized as necessary are stored on your browser as they are essential for the working of basic functionalities of the website. We also use third-party cookies that help us analyze and understand how you use this website. These cookies will be stored in your browser only with your consent. You also have the option to opt-out of these cookies. But opting out of some of these cookies may have an effect on your browsing experience.
Necessary Always Enabled
Necessary cookies are absolutely essential for the website to function properly. This category only includes cookies that ensures basic functionalities and security features of the website. These cookies do not store any personal information.
Non-necessary
Any cookies that may not be particularly necessary for the website to function and is used specifically to collect user personal data via analytics, ads, other embedded contents are termed as non-necessary cookies. It is mandatory to procure user consent prior to running these cookies on your website.
SAVE & ACCEPT