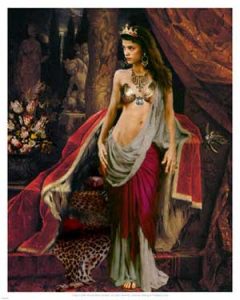 Jezebel is presented as the most ruthless and evil queen in Israel’s history, who turned the people to the worship of false gods, slaughtered the prophets of YHWH, the god of Israel, and led others to do evil as well.

Her name, more correctly “I-zebel,” means “where is the prince,” which was a ritual cry honouring Baal in worship ceremonies during times of the year when he was thought to be absent in the underworld.

Read 1 Kgs 16:30-33; 18-19; 21; 2 Kgs 9:30-37.
She is introduced in 1 Kgs 16:31 as the wife of Ahab, son of Omri and the King of Israel – the Northern Kingdom. Jezebel was a Phoenician princess, the daughter of King Ethbaal of Tyre (as “Sidonians” in 1 Kgs 16:31 means Phoenicians more generally). The marriage would have cemented the alliance between the Omride dynasty and Tyre. Jezebel is presented as a devoted worshipper of the Phoenician deities Baal and Asherah, and a bitter adversary of YHWH and persecutor of his prophets.

Ahab’s marriage to Jezebel is presented as a highpoint of sin. 1 Kgs 16:30-33 reports that he did more evil that all the kings who went before him. Like them he followed ‘the sin of Jeroboam son of Nebat’, that is (probably) the worship of YHWH in the form of the ‘calves’ at Bethel and Dan (1 Kgs 12:25-33), which the Deuteronomistic editor of Kings denounces as the sin of each and all of the kings of Israel. But then, ‘as if this was not enough’, he married Jezebel, went and served Baal and made an Asherah (a wooden post or sacred ‘tree’ used to worship the goddess Asherah), which “angered YHWH.” Thus his worship of these deities is presented as the direct result of his marriage to her.

In the story, Jezebel seems to wield considerable power and influence over Israel in her own right, almost like a co-regent with Ahab. She exterminates prophets (1 Kgs 18:4, 13; 19:2), and personally orders the elders to execute Naboth in 1 Kings 21, so that his vineyard can be seized as royal property. The 450 prophets of Baal and 400 prophets of Asherah eat at her table, not Ahab’s, in 1 Kgs 18:19; so she seems to have her own court, as well as the financial means to maintain it. But the most remarkable sign of her influence, though it is not spelt out, is that in 1 Kings 18 Elijah has to fight for Israel to retain YHWH, rather than Baal, as their God, and complains in 19:14 that they have deserted YHWH.

She is killed in the coup by Jehu against Ahab’s son Joram (2 Kgs 9:30-37), ordered by Jehu to be thrown down from the window where she is looking out. This is said to fulfil the prophecy of Elijah in 1 Kgs 21:23.

For Jezebel’s children, see the end of this article. 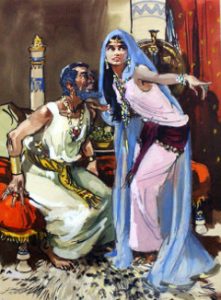 The ‘Baal’ of Jezebel would have been Melkart, the state god of Tyre. ‘Baal’ was a title applied to many gods, including local Canaanite gods worshipped by Israelites according to, e.g., Hos 2:14. Although these are often presented in the Old Testament as foreign gods, ‘the gods of the peoples who were all around them’ (Judg 2:12), they are much more likely to have been local. They should not be confused with Jezebel’s Baal, the Baal in 1 Kings 18, who is a state god, and the issue in 1 Kings 18, between Elijah and the prophets of Baal and Asherah, is this: YHWH is the god of Israel; is YHWH to be replaced by ‘Baal’, the god of Tyre? This is the issue forced by Elijah, who accuses the Israelites of hesitating between them rather than making a clear decision (1 Kgs 18:21).

Whether it was historically true that Jezebel tried to make her god the state god of Israel and persecuted the prophets of YHWH (1 Kgs 18:13; 1 Kings 19) is very doubtful. It is difficult to find precise parallels in ancient history: normally ancient peoples were content to let each people worship its own gods.

Jezebel: a woman of power?

The power which Jezebel is shown as wielding over Ahab and over Israel in the biblical story may have some historical justification.

According to the Jewish historian Josephus, Ethbaal, Jezebel’s father, was high priest to the local goddess Astarte. This is Ashtoreth in the Hebrew Bible; but this name does not occur in Jezebel’s story, and it seems that all the Canaanite goddesses were becoming confused in Hellenistic and Roman times. It has been suggested (Brenner-Idan) that corresponding to practice known from Mesopotamia, Jezebel might have been high priestess to the male god Baal (Melkart), a role carrying considerable political as well as religious power, which might explain her devotion to this god, and also the power that she claimed to wield in her adopted home.

The biblical writers may have remained silent about Jezebel’s role as high priestess because they refused to acknowledge the legitimacy of female priesthood or authority, but it is more likely that they simply refused to acknowledge the legitimacy of the entire Baal cult altogether, and any role that Jezebel might have played in it. Jezebel is pictured as a usurper of authority and power in what is really, in their minds, YHWH’s kingdom, not Ahab’s. So the biblical writers would have little interest in acknowledging any role or source of authority that she felt she had whilst usurping God’s reign. 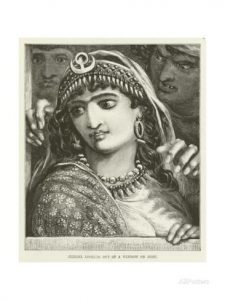 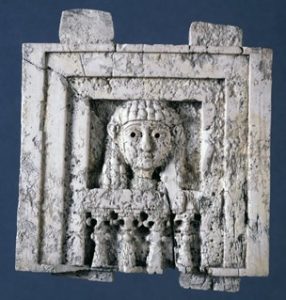 The depiction of Jezebel looking down from the window in 2 Kgs 9:30 is quite similar to the ‘woman-at-the-window’ motif found widely in both literary and pictorial sources throughout the ancient Near East, which represented the goddess. Jezebel is presented as a powerful woman, sitting in her window and assuming the posture of the goddess herself. This is confirmed by the mention of her doing her hair directly before sitting in the window. For a defining feature of the woman-at-the-window image in the material sources was carefully done hair, in the style characteristic of the Egyptian goddess Hathor, who elsewhere was understood as Asherah. Jezebel is portrayed as the woman-at-the window, an imitation of the goddess Asherah. Jehu’s confrontation with her may then be seen implicitly as a confrontation with Asherah herself, so that her death, and the destruction of her body, is depicted as a rejection of this goddess, who contested the power of YHWH. Her remaining body parts – her skull, the palms of her hands and feet – also happen to correspond to the appendages that the goddess Anath wore as symbols of her power, so that the irony of this detail in the story may be that Jezebel, who sat as a powerful goddess in the window, is reduced to these appendages, and destroyed by her allegiance to the very gods whom she thought would protect her.

The biblical material presents a thoroughly negative picture of Jezebel, and many have questioned whether she is judged unfairly, However, we know virtually nothing about her apart from what we read in the Bible, so the material for answering the question is lacking. What we can say is that the biblical writers have made her a symbol of all that is opposed to the acknowledgment of their own God as supreme, so that in a way she transcends history, and even in the New Testament (Rev 2:20) her name is used to abuse a prophet who gives teaching that the writer of Revelation disagrees with (and probably distorts). There is a large measure of misogyny in this presentation of a woman who is both evil and powerful—so powerful that she can impose her will on one of Israel’s most powerful kings.

One hard fact in the biblical account goes against this picture. We know the names of three of her children: Ahaziah, Joram, and Athaliah. Strictly speaking only Joram is stated in the biblical text to be Jezebel’s son (2 Kgs 9:22), but it seems very likely that Ahaziah, who was Ahab’s immediate successor (1 Kgs 22:51), was also the son of Ahab’s principal wife; and Athaliah, who married king Jehoram of Judah, was the mother of king Ahaziah of Judah (2 Kgs 8:25-27), and took over the reins of power in Judah when her son was murdered (2 Kgs 11:1), is certainly presented as a woman in the mould of Jezebel. However that may be, all of these names, Ahaz-iah, Jo-ram (short for Jeho-ram [in Hebrew pronounced with a y at the beginning]), and Athal-iah honour YHWH (also called Yah and Yaho), not Baal. Is this the sign of a woman who always got her own way?

Any cookies that may not be particularly necessary for the website to function and is used specifically to collect user personal data via analytics, ads, other embedded contents are termed as non-necessary cookies. It is mandatory to procure user consent prior to running these cookies on your website.